Why Use a Hand-Over-Hand Teaching Approach


I consult at an adult program where many individuals have difficulty grasping or using their hands in other functional ways.  Most of them have developmental disabilities but a few have had brain injuries or strokes.  I am frequently explaining why whenever possible, it is better to provide Hand-Over Hand assistance to grasp a spoon  rather than staff feed the person. 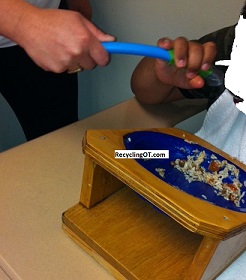 uld be if providing HOH causes agitation or any other emotional/physical response that impedes safe eating. Consuming nutrition is of course the most important concern but many staff wonder why even bother using the HOH technique in the first place when it is faster and easier to feed the person? In fact, some of these clients are fed by family or staff in their residential settings and perhaps this inconsistency confuses them?

Adult Day programs requires that we work on developing skills, goals and strategies that support learning and independence. If the client's physical/and or cognitive status is at a level where they don't yet grasp a spoon, then this seems like a good functional skill to work on. Most people  are motivated to eat!

A 50ish year-old woman I will call Michelle had a brain injury decades ago and she wants to feed HERSELF. Great, the staff assumed that they would feed her because she has such limited hand use.  But instead they provide a pre-loaded spoon or fork with built up handle. Staff place their hand on top of hers in order to bring the spoon toward and enter her mouth. Michelle is very happy to be feeding herself even though she is fed at her residence. but that is not within my control.
Michelle has much spasticity so I showed the staff how to gently move and relax her first before placing the spoon inside her tightly flexed hand. The spoon functions as a splint since it is opening up her hand and the movement from bowl to mouth provide range-of-motion. Another benefit is that the HOH process takes longer than if staff feed her. That is a good thing since many of the clients need extra time to manipulate and swallow food.

The young man, Jose shown in the photo above has Down Syndrome. He throws objects and prefers to eat by grabbing fistfuls of food with his hand.  His mom feeds him at home.  I extended the spoon handle with tubing rather than placing my hand on top of his because he does not want to be touched. after he grasps the spoon handle, I place my left hand on Jose's shoulder and push it backward and at the same time I push his elbow inward toward his body. This prevents him from bringing his head into the plate to eat. Its challenging, but he has gotten used to this technique and knows what to expect. Staff need to quickly catch the spoon after Jose fills his mouth so that he does not throw it. Staff feeding him is surely easier. But this is a young man who has almost no other hand skills and he LOVES to eat. His food smells of fantastic home made foods from Central America.


An individual, named Barry has an objective to increase the amount of time grasping an object. Its obviously a pretty early developmental skill and babies are typically good at this at around 6 months of age. It is unlikely that an older man will learn to grasp if he hasn't by now. 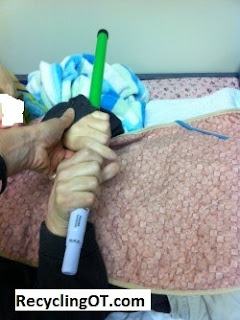 However, providing HOH to grasp and move this object ( a green groan stick attached to a vibrating toothbrush) provides sensory and social stimulation. Barry enjoys the touch, smells, vibration and attention. Perhaps he will learn to grasp with less assistance as we explore other objects he might enjoy.


Eric in the photo below is also working on grasping objects. I place the groan stick inside his palms and he maintains his grasp as I lift it upward.  I also gently push the stick toward Eric's body so that he is less likely to release.  Eric appears to enjoy the social aspect and deep pressure sensory stimulation from the pushing. 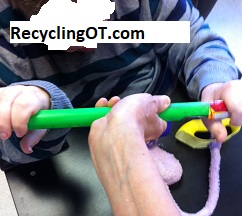 The last photo is of an extremely social and smiley woman I will  call Jill. She is very spastic and has minimal motor control.  I placed a tube of hand lotion inside a rolled up cushion so that when her hands are pushed downward, lotion squirts out. Staff place her arms on the cushion and provide HOH assistance to push. Different individuals enjoy coming over to her wheelchair to receive lotion. Everybody enjoys this and benefits from the social and sensory aspects of receiving lotion from their friend.

Naturally, parents and teachers may use the HOH training technique to initially teach very simple skills such as brushing hair to complex skills such as closing a zipper.  As they learn, most children require less and less physical assistance, point and/or verbal cues until they are independent. Then practice makes perfect and on to learning a new skill!. 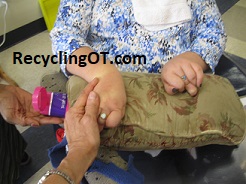 Adults with disabilities often continue to benefit from  Hand-Over-Hand support even though they likely will not be independent. However, as you can see there are many other benefits to HOH supports.

The video below demonstrates the different levels of assistance provided to perform tasks...ranging from independent to HOH and/or dependent. As an occupational therapist my goal is to help people not only be as independent as possible, but enjoy their quality of life. This often involves adapting meaningful activities and incorporating sensory stimulation when possible. This is what makes occupational therapy so rewarding and fun. 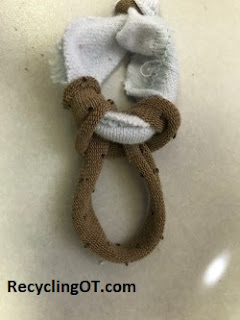 Looping is a great motor planning skill that helps to develop the dexterity to form knots and tie shoes. You can use the colorful loops sold in craft's stores used to make pot holders. These are pretty but thin and therefore, more challenging to manipulate. Experiment by cutting up old clothing:
1) sleeves from shirts
2) pant legs from fleece pants
3) socks

Just slice away to create the loops. The thicker the loops, the easier it will be to unknot them. Longer loops from sleeves are easier to loop together than the smaller ones cut from socks.

Stretchy fabric like fleece is a lot of fun to manipulate and as you will see in the video you can make a long stretchy cord to use in sensory motor activities. 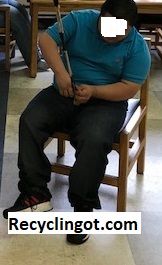 Students or clients can work on these while sitting or standing. The client sitting in the photo has hemiplegia. His right hand is weak but he is able to link his index finger inside a loop in order to unknot it using his left hand. He is unable to connect the loops....or rather I should say we haven't figured out an adaptation  that will enable him to do so, yet. He loves repetitive fine-motor tasks and I love seeing him use his right hand!

Attaching the loops to create a long chain enables students or clients to be rough with the fabric....pulling and picking at it without it ripping. Its great sensory fun! In the second video, I demonstrate how to make the loop chains out of plastic bags. Then I make yarn and knit out of them. This is quite a high level skill. However, some students may be able to perform some of the steps. They will need to think about how much force they are using so that the chain does not rip. However, if it does rip, its easy to make a knot and continue and best of all there is an abundance of free plastic.... At least 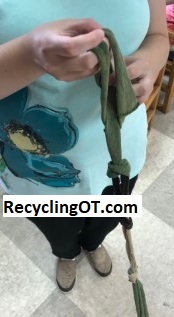 for now until it is banned everywhere....


Below is a photo of my client enjoying making a very long chain. Of course, one must use discretion to avoid choking and tripping on them. I attached a loop on a high ceiling hook, shown in the video t

hat will not get in anyone's way when the activity is not being used.

Another option is for the individual to work while seated facing the back of the chair.  I taught this client how to wrap the chain around the back of the chair to keep it short. The long chain can easily be removed to be used in an activity or for a client to unknot and put away. 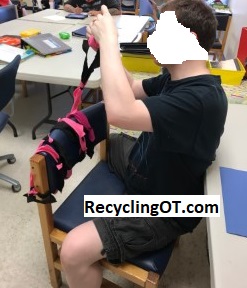 As you can see, these recycled materials are easy to find and this activity is quite versatile. One of my clients enjoys opening the loops and placing them over a ring stack. He enjoys the sensory experience of pulling the fabric loops open to fit over the top of the ring stack which has a ball attached. He really has to use force to open and fit them over the ball before pushing down the stack.

Have fun and please share any new loop ideas..... 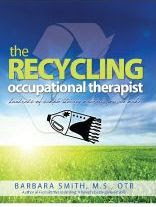